In just 70 minutes, you can drive from Manhattan to Asbury Park, New Jersey, and escape to one of the hottest neighborhoods in the state (think Williamsburg meets Bruce Springsteen-land meets Venice Beach). And if you want to do it regularly enough, the city’s mega-developer, iStar, thinks they’ve struck the perfect balance between urban luxury and oceanfront living in their new condo/hotel, the Asbury Ocean Club. Ranging from $900,000 to one bedroom two $6 million penthousesthe price is definitely more NYC, but on a recent visit, it was clear that the artsy vibe, live music scene, and booming foodie culture are uniquely Jersey Shore.

Asbury Park got its start in the late 1800s as a posh summer retreat for wealthy residents of New York and Philadelphia. With a long promenade, several large hotels and entertainment, an estimated 600,000 people would vacation here during the summer months. Further waterfront developments took place in the 1920s (much of which were designed by the architects of Grand Central Warren and Wetmore) and solidified Asbury’s destination status. By the 1960s and 1970s, the vibe had shifted from elite to artsy with the Stone Pony’s iconic music room putting Bruce Springsteen and the Jaywalkers on the map. However, following the Asbury Park race riots of 1970, the town fell into abandonment and disrepair. Fast forward to 2002, however, and Asbury quickly underwent political, infrastructural, cultural and economic revitalization. The music scene is booming again, boardwalk landmarks like the Convention Hall have been restored, and a new restaurant or vintage clothing store seems to pop up every day. 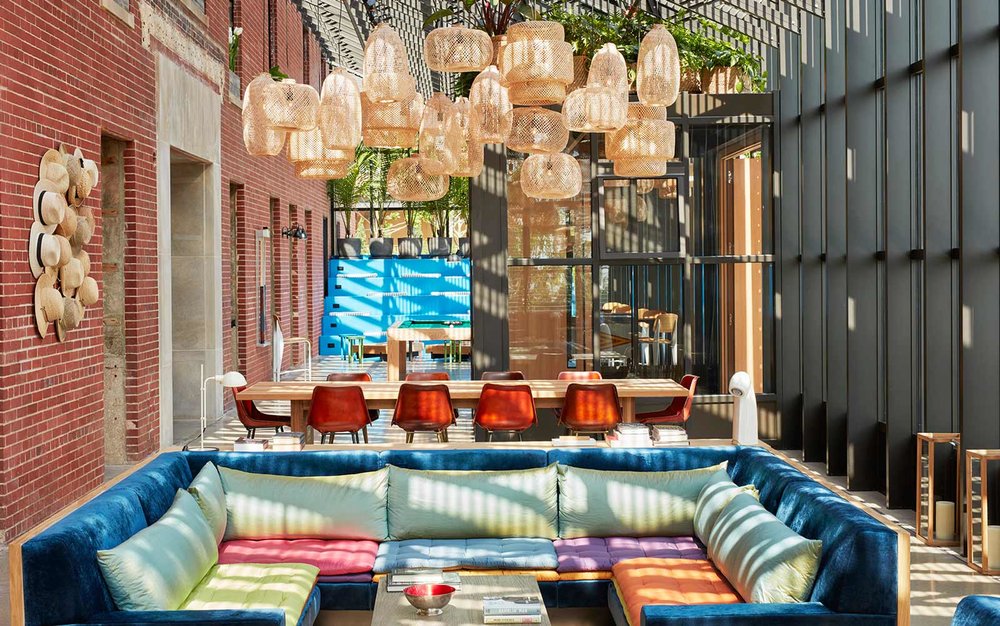 But of course the big piece of the puzzle is where people inhabit at Asbury Park. And to that end, it was developer iStar that spearheaded the town’s resurgence of the 17,000s. The developer owns 35 acres, or 70%, of the waterfront, including another chic condo, Monroe, the renovated Asbury Lanes bowling alley, bar and performance venue (yes, Bruce was there to reopen the spot), and The Asbury Hotel, where hostel-style rooms can cost up to $500 at night in high season. 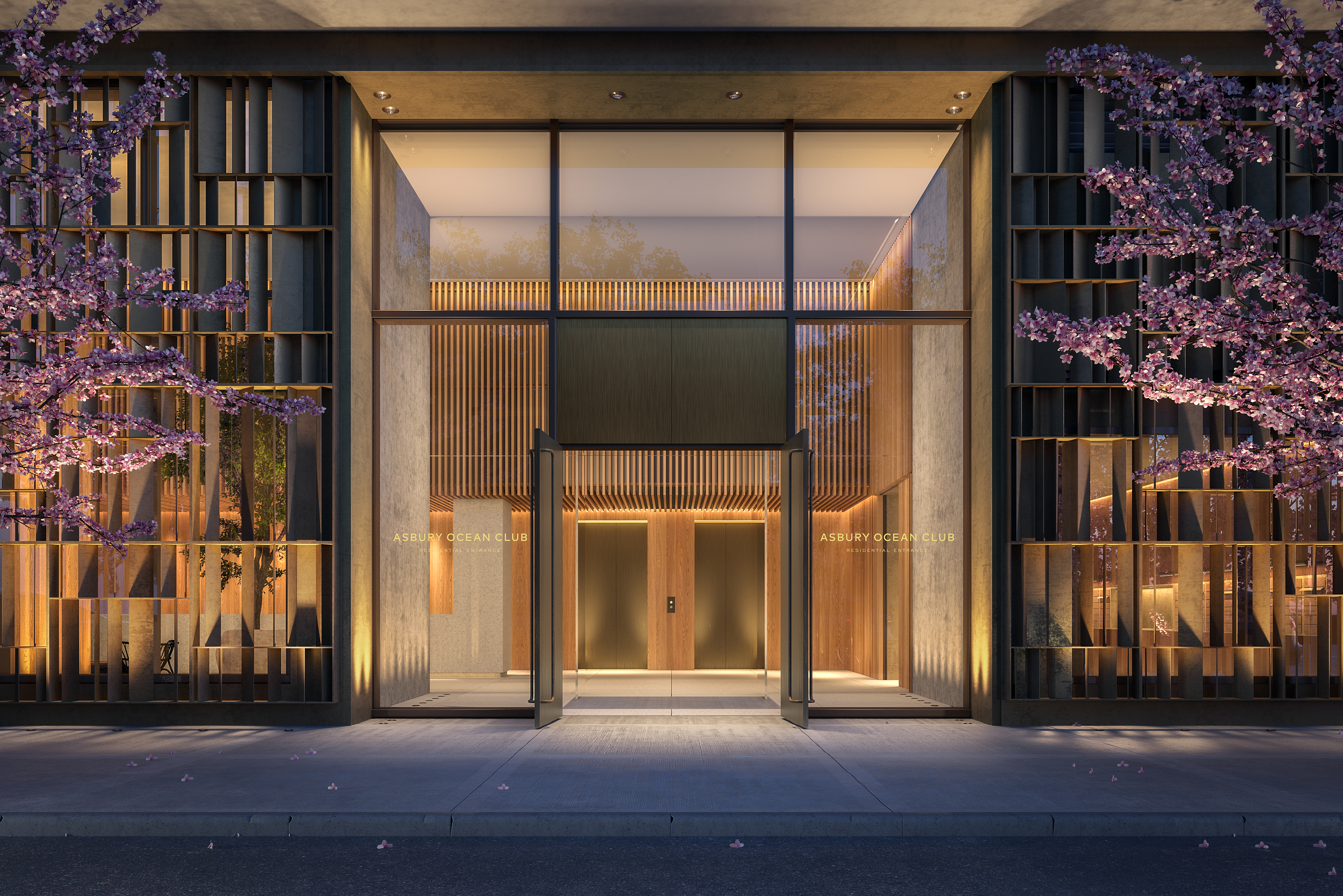 To date, iStar has spent $300 million on its multi-billion dollar 10-year development plan. And the “jewel in the crown” is the Asbury Ocean Club, a 17-story condo-hotel that is arguably the most upscale development in town. It will include 130 condos – starting at 900,000 for an 800 square foot one bedroom and capping at $6 million for each of two ocean front penthouses. These units will be located on top of a 54-room hotel, which will be adjacent to the pool deck. 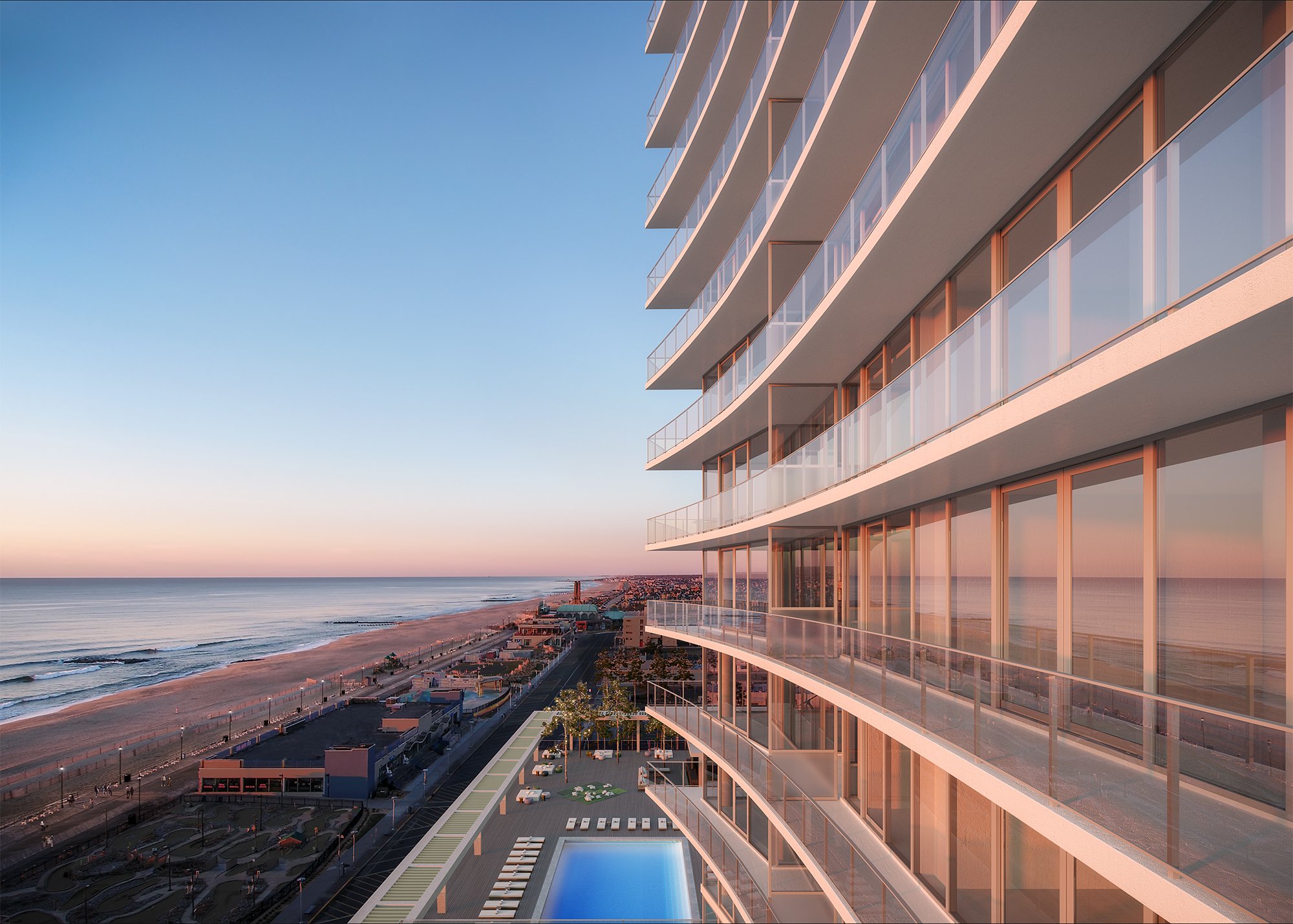 The building was designed by New York-based Handel Architects (they are also behind the Dream Downtown Hotel in Manhattan and the Rosewood Hotel in Abu Dhabi). “We chose an open, light and airy vernacular beach house, and kept materials simple, concrete and glass with wood accents,” said manager Gary Handel. “The balconies extend to accentuate the horizontal quality of the views. We then added a slight curvature to the building to reflect the shoreline. 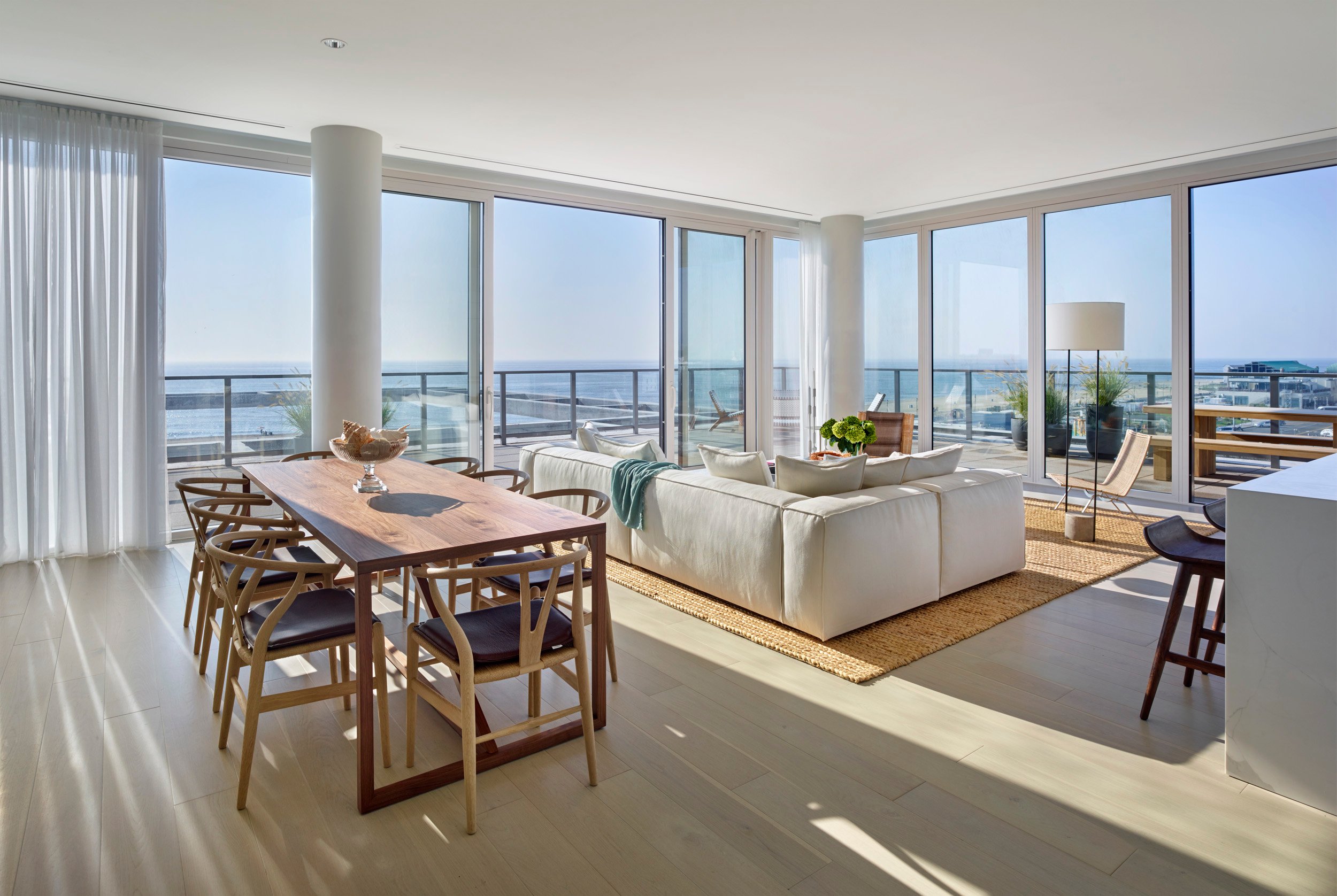 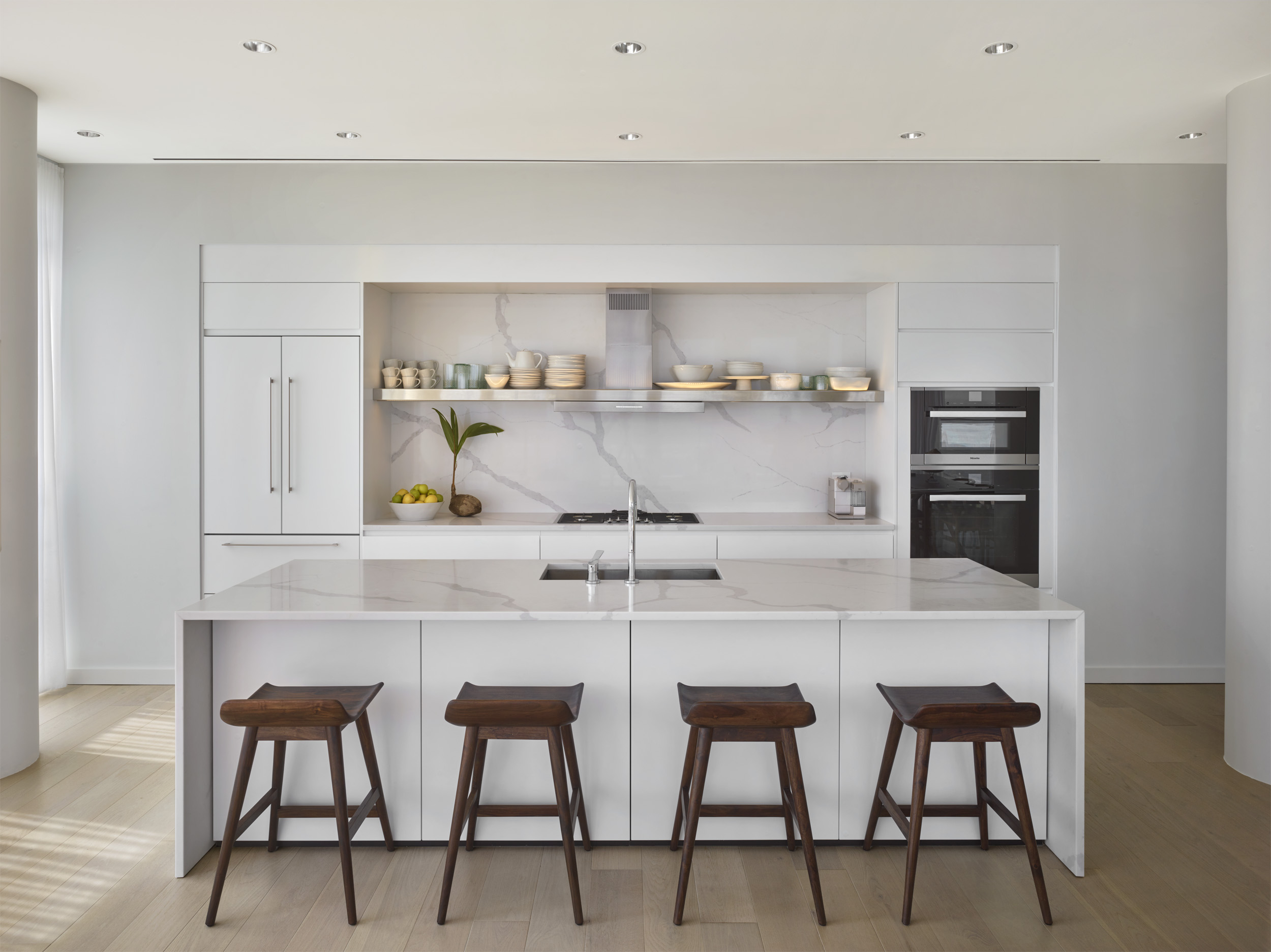 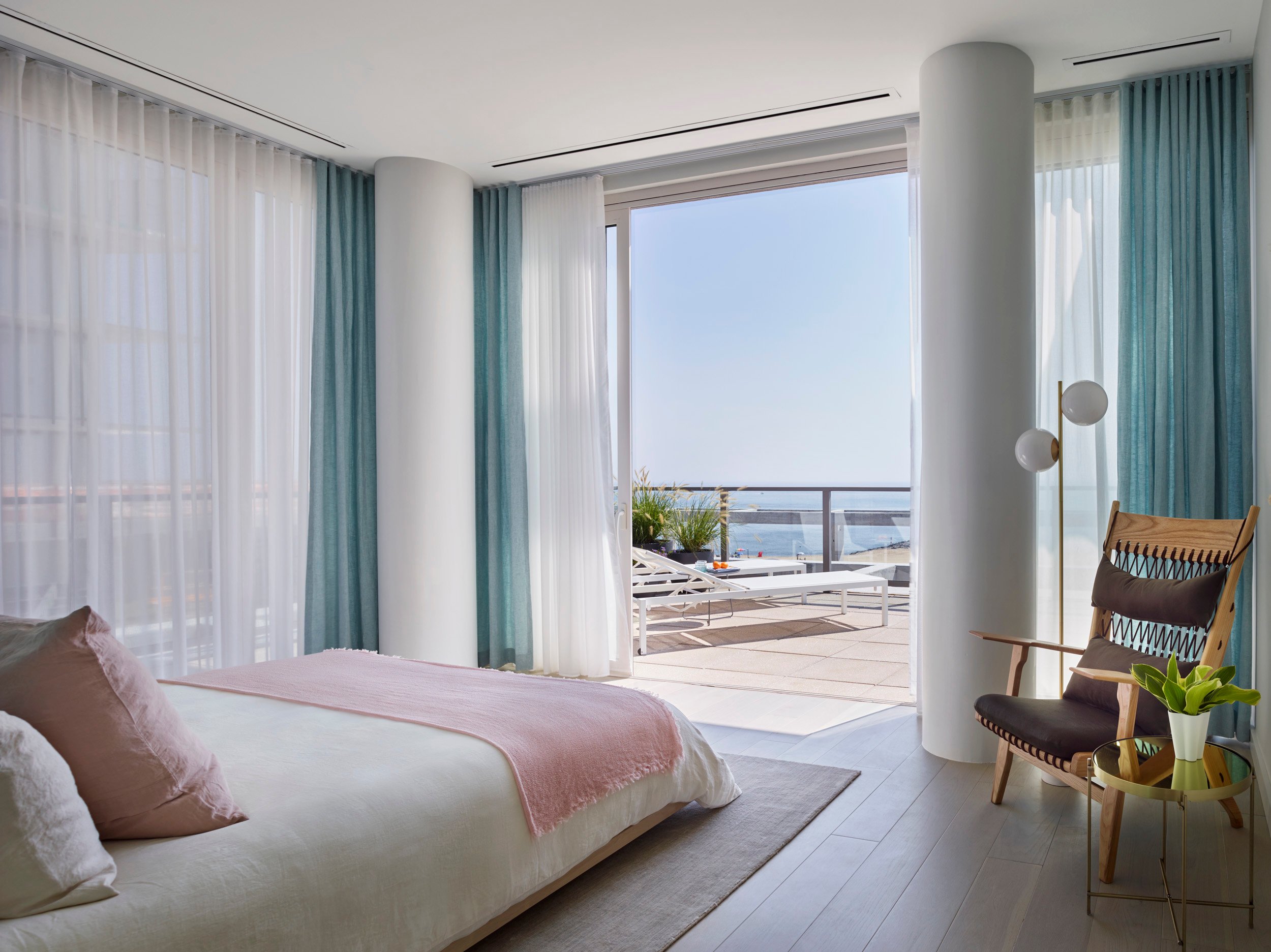 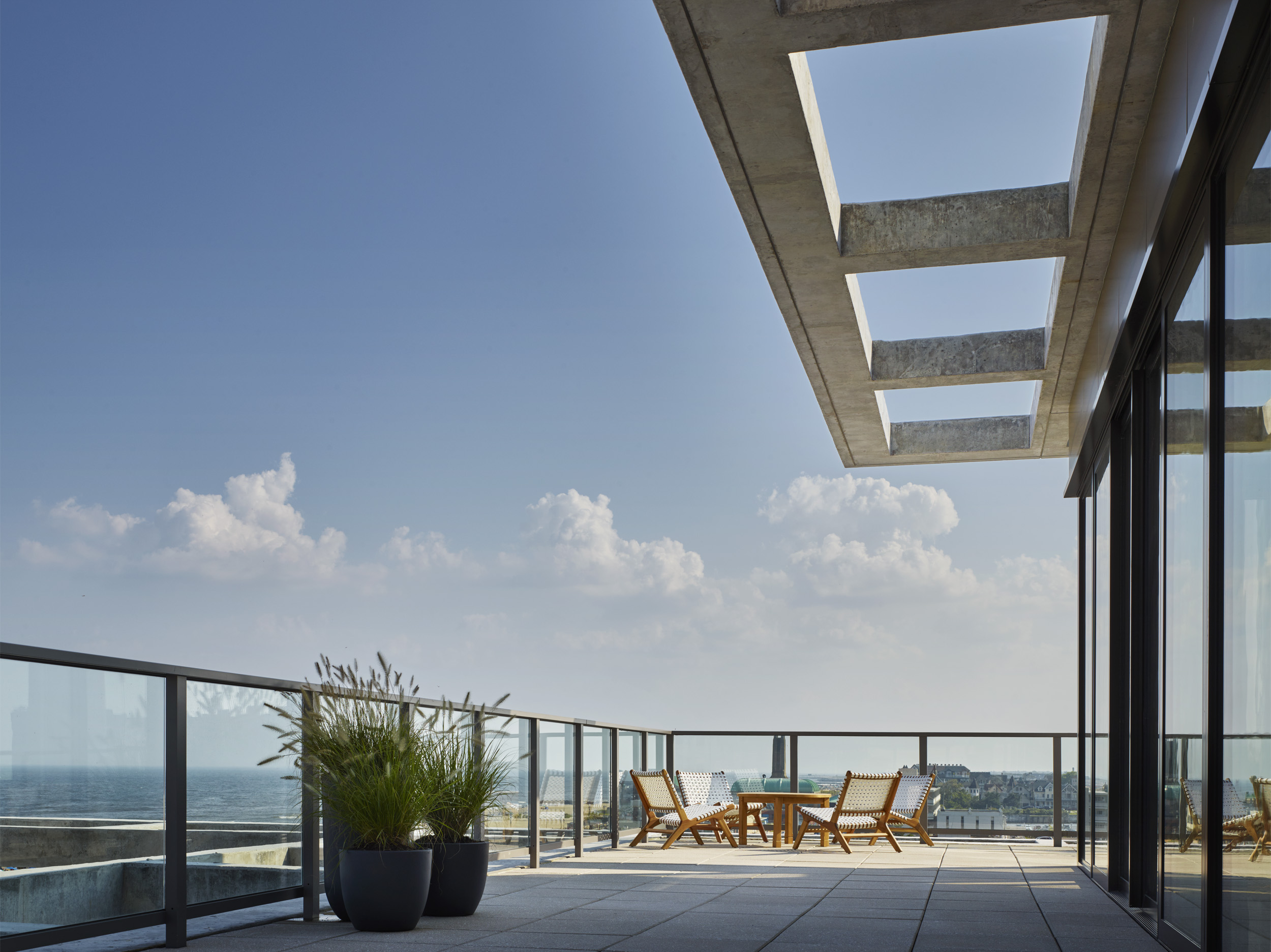 The interiors are signed Anda Andrei Design. President Anda Andrei worked on the Delano in South Beach and the Gramercy Park Hotel in Manhattan. She is also iStar’s Creative Lead and Design Director for the overall revitalization of Asbury Park. “It’s impossible to find a place so close to New York, on the ocean, with incredible buildings of great architectural significance, amazing history and soul, and a major music scene,” she said. . “With Asbury Ocean Club, we strike a beautiful balance true to beachside living – luxurious without being pretentious, casual yet chic – the elegance of timeless materials in a modern, contemporary setting. It’s unlike anything in the area, the building feels like it belongs on this beach. 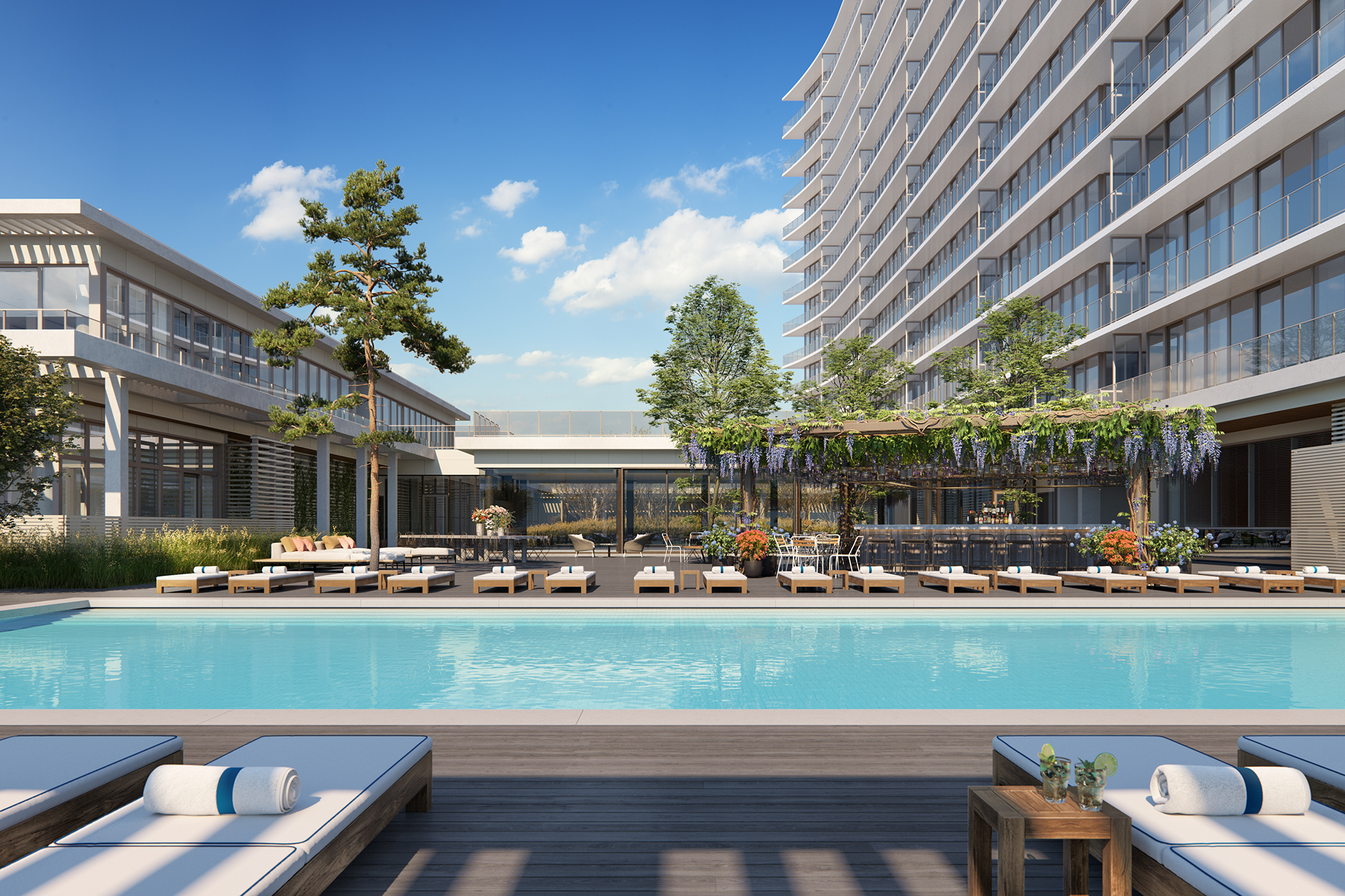 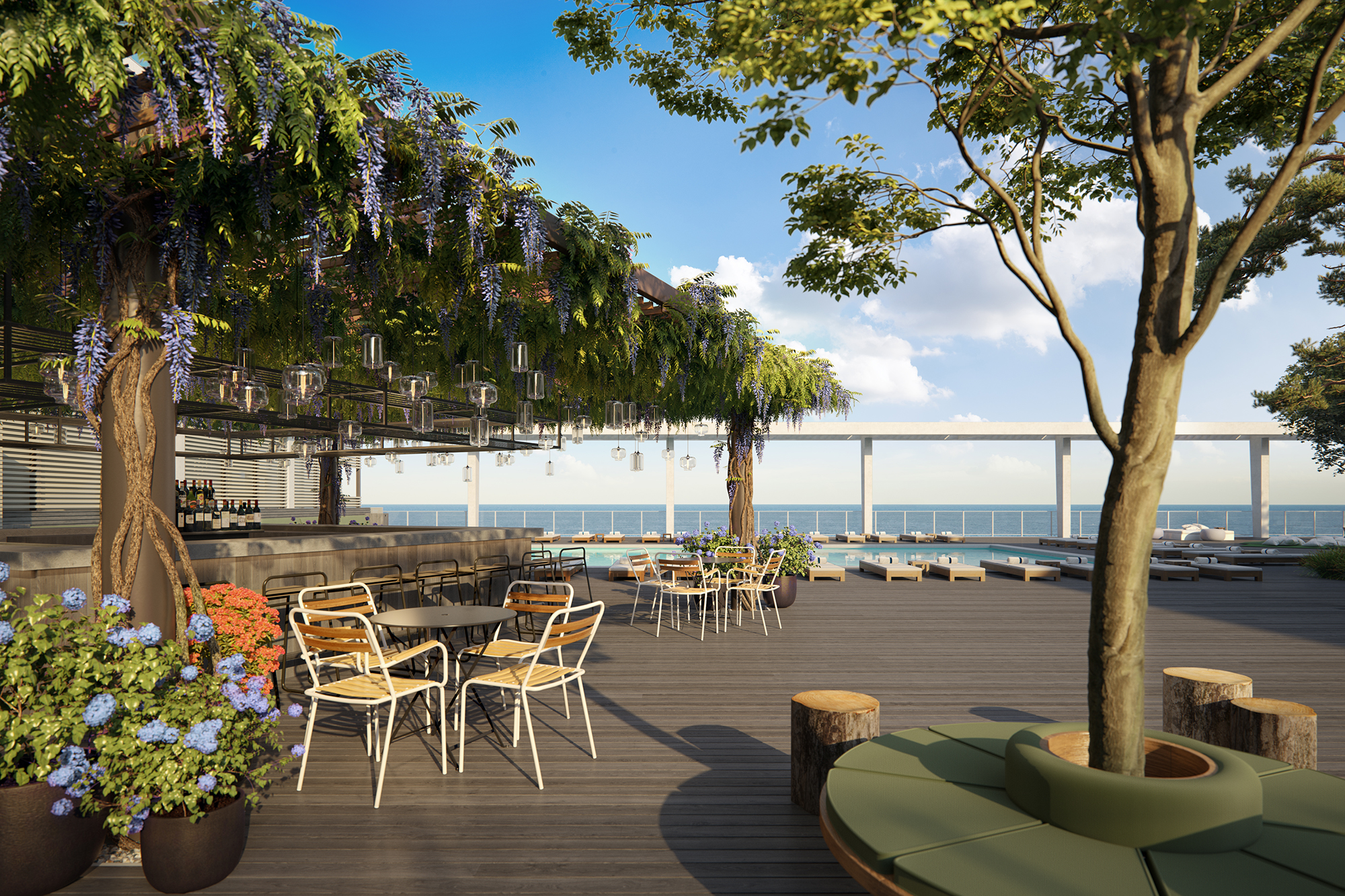 The fourth floor amenity spaces are shared by condo residents and hotel guests. The 65′ x 30′ terrace features a swimming pool overlooking the beach, an outdoor bar and grill and a gazebo with a water mirror and a lounge with a fireplace.

Other amenities include a 17-seat screening room, ocean-view fitness center, yoga room with meditation deck, spa, dog wash, surfboard storage surf, a games room and an event space with a demonstration kitchen. By 2020, iStar plans to open a “private members-only beach club with a pool, cabanas, bar and grill, restrooms, and changing rooms.” The ground floor will include retail space, a gourmet restaurant and a dining room.

Asbury Park Mayor John Moor said the development is expected to bring in between $2 million and $2.5 million, or about 10%, of the city’s annual tax revenue.

Rendered courtesy of Binyan Studios; photos of the model room by Nikolas Koenig

The Ocean Club property in Seaside Heights, NJ (Photo: Ocean Club Staff) Among the most ambitious projects ever proposed for Seaside Heights, the Ocean Club complex at the southern end of the borough’s boardwalk was born from the wreckage of the Superstorm Sandy, along with its owners – a group of Shore residents – having […]

What happened to… the Ocean Club?

The Ocean Club was a meeting place for drinking and dining in Henrietta with a tropical atmosphere designed in part to counter the harsh reality of Rochester-area winters. The chic club featured metallic palm trees, marble floors, and hand-painted murals of beach scenes. The owners reportedly spent over $3 million to build the place in […]